Every Monday morning, we release the SuperLobby NFL Lowdown - a report that covers the user numbers from the Sunday’s NFL action. In the last month or so, total GPP entries have been on the wane.

It is easy to speculate as to the reason for the decline:

To be honest, the truth is probably a combination of all of the above - and many more factors besides.

At the moment, we are in the process of finding out if NBA Daily Fantasy Sports is going to follow a similar pattern. We are now three full weeks into the season, and the trend has been towards tentative growth.

The NFL Lowdown’s sibling - the SuperLobby NBA Lowdown, released on a Wednesday - has highlighted some fascinating developments since the season started. The main pattern that has emerged? Smaller GPPs, resulting in more sustainable margins for the operators. 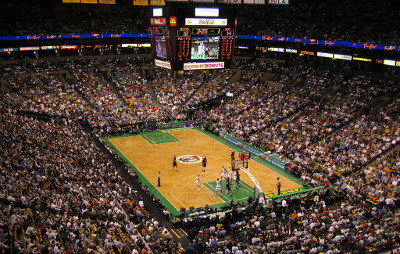 Take, for example, Fantasy Aces. On an NFL Sunday, Fantasy Aces has so far failed to post positive revenues this season. Its best return - $1.08 out in prizes for every $1 received in entry fees - is still a long way from break-even. And even a single-digit loss is atypical - results of more than $1.20 out per $1 in are common.

Yet this week, FantasyAces enjoyed overall positive revenues in NBA GPPs. It was a watershed moment - previously, only Draftpot had muscled in alongside FanDuel, DraftKings, and Yahoo in this exclusive club.

While FanDuel and DraftKings can afford to offer enormous GPPs in a bid to dominate the DFS market, smaller operators are in limbo. Every Sunday, they lose their shirt in NFL overlay, knowing full well that they cannot compete with the huge budgets of the market leaders. That is why the NBA results are so noteworthy. They hint at a sustainable future for the smaller sites, if they are prepared to rein in the overlay and focus on more than NFL Sundays with huge guarantees. We have been excited by the NBA DFS numbers so far this season - let’s hope that the growth curve continues.

Let’s be honest - Daily Fantasy Sports is not yet at a level of maturity whereby we can draw conclusions with certainty. Nevertheless, we are not being blindly optimistic in hoping that the market finds some stability.

Massachusetts is attempting to draw a line in the sand. And with New York’s unsavoury public mudslinging still fresh in the mind, it will be a relief for operators that a reasonable dialogue is underway.

Amongst the legislation proposed by Attorney General Maura Healey is that DFS should only be accessible to those over 21 years old, and operators must meet ‘problems in gambling’ protocols (ie. identify and support those who suffer from gambling problems).

So far, so sensible.

Where the Legislation May Hinder DFS Players

Yet, certain proposed legislation seems heavy-handed, at first glance. In particular, the idea that users cannot deposit more than $1k in a month, without proving that they have the means. As anyone with a background in online gaming of any sort will attest, a $1k cap could seriously limit the liquidity of the industry.

By way of a reference point, many DFS contests run at a $1k buy-in level. Theoretically, a couple of consecutive losses could see DFS players fall afoul of the laws. Doing so means that the player has been unprepared or unlucky; not necessarily a victim of a gambling problem.

The Perils of Keeping a Big Bankroll Online

DFS sites are not banks. Players don’t keep their full bankrolls online - they are always in a cycle of withdrawing some, depositing some. However, the Massachusetts legislation could well impact upon the ability of perfectly profitable players to perform their job. Swings are part of the game, and it would be a real shame for the legislation to hinder for little apparent reason.

It is progress, and we should be happy that every stipulation is achievable. Yet on first glance, it is clear that a lot of hoops are going to be jumped through - by players as well as operators.

Sign up for bonus offers and the latest DFS info